Today, on Indigenous Peoples' Day, indigenous people and climate activists are gathered in Washington DC to demand the end to disastrous fossil fuel policies that continue to threaten native lands and cause climate change, despite the alarms from the recent IPCC report. Scroll down to take action below, or read on to learn more.
Ipsun would like to acknowledge the traditional ancestral territory of the Manahoac tribe in Fairfax County, upon which we are working every day. The tribe no longer exists; in the mid-1600's they were killed by warring tribes and English settlers, as well as disease brought by the Europeans, until only about 50 members remained. These few joined with the Monacan tribes to the south. Many of these Monacan people were displaced by European encroachment and joined other tribes, but today about 2,000 people still live in Virginia as members of the Monacan Indian Nation.
Our company exists to fight climate change by installing as many solar panels as we can, but we know that the mission is bigger than that. If we want to save our planet from global heating, we must also acknowledge and actively fight against the long-standing systems, like colonialism, that are working against us. Colonialism is not just in the history books; it continues to this day as Indigenous people's land is destroyed by polluting fossil fuel interests.
In Virginia and across the country, as fossil fuel companies build pipelines and infrastructure on ancestral lands with impunity, we see that Indigenous people are still marginalized and treated as disposable. Indigenous communities have contributed the least to the climate crisis, with ancestral practices that preserve the natural world. But they’re disproportionately impacted by environmental injustices with polluted air and water. To build a climate movement for us all, we must listen to indigenous voices all year round.

Learn about and take action against the Line 3 pipeline in Minnesota, which violates the treaty rights of native peoples and nations in its path, and doubles the climate impacts of pipelines already in use in MN. 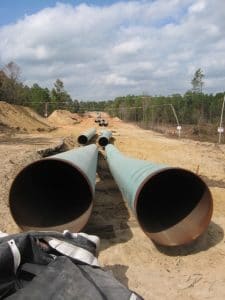