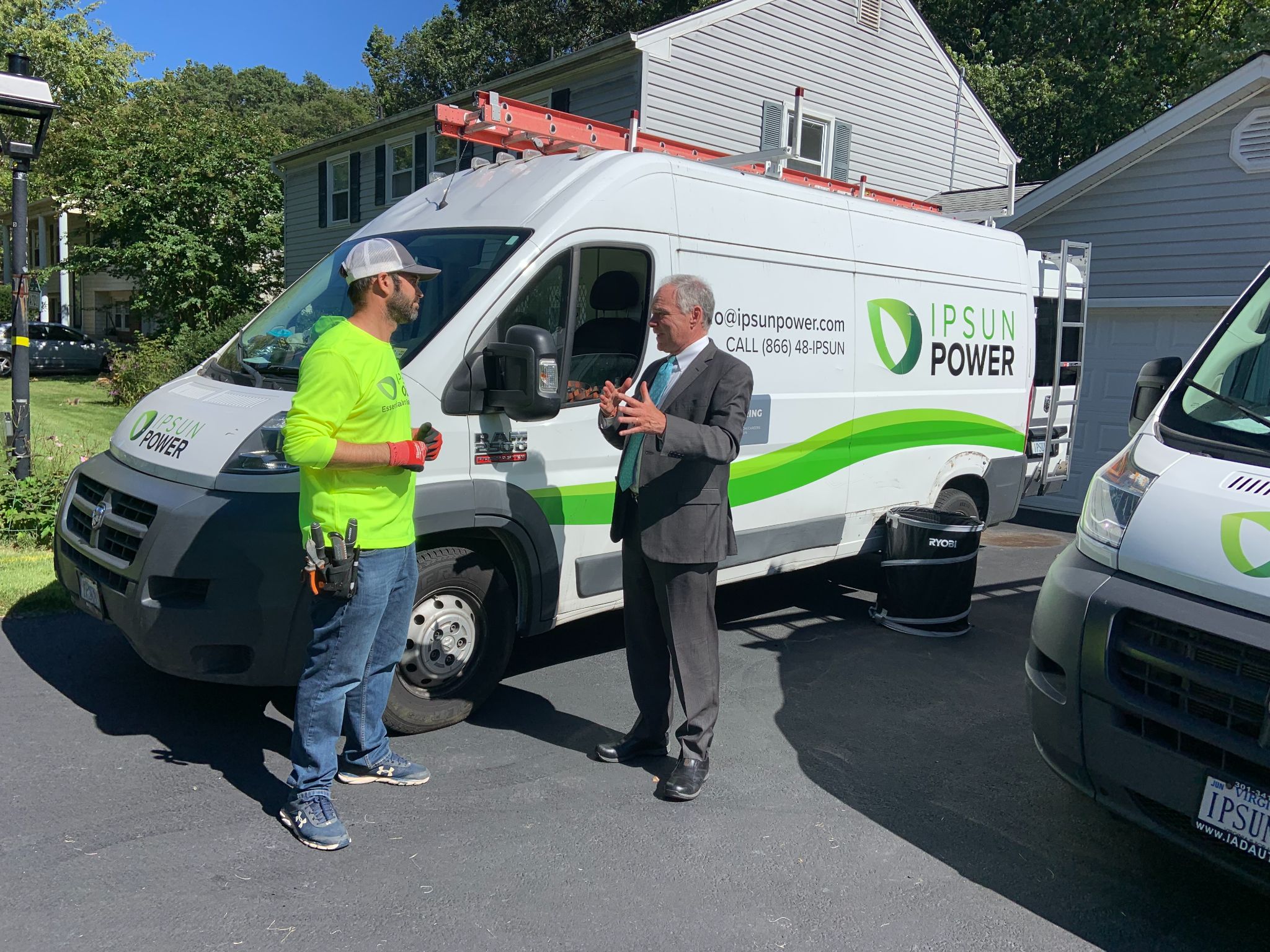 Take action to help get this important climate policy over the finish line!

Ipsun was honored last week to have Senator Tim Kaine visit one of our customers’ installations. We have been working to spread the word about the importance of extending the federal solar tax credit as part of the upcoming Build Back Better Act, and we were so grateful that the Senator’s office reached out for a discussion.

Please read on to learn more and then take action below to let your legislators know how important the extension of the solar tax credit is— especially with the direct pay option.

Our CEO Herve Billiet wrote to Senator Kaine recently about extending the tax credit and adding a “direct pay” immediate cash-back option for lower-income homeowners who may not owe enough in taxes to benefit from the credit. It turned out the Senator was interested to learn more about solar and the effect that the tax credit has on everyday people. His staff asked if he could come to visit a job site and we happily agreed.

We were especially pleased that special guests Abby Hopper, CEO of the Solar Energy Industries Association, and VA state Delegate Karrie Delaney also joined us. The conversation that took place in our customer’s backyard was wide-ranging and fascinating.

The solar tax credit (known officially as the ITC) is regarded as one of the most effective climate policies our country has ever enacted, and it expires next year. The upcoming Build Back Better Act would extend the credit for 10 years, and bump it up from 26% to 30% of the total cost of a solar project. The Build Back Better Act will soon be up for a vote, possibly next week. If it fails, with mid-terms coming right on its heels, we may lose this opportunity to enact meaningful climate policy for quite a long time.

As the most recent IPCC Report tells us, code red for the climate is now. We don’t have any more time. As a company whose mission is to fight climate change, we are doing everything we can to get this policy enacted and we hope you’ll join us by taking action below.

To help this effort, we have joined a coalition of 350 climate, industry, and grassroots groups at Residential Renewables for All working to get direct pay for homeowners included in the Build Back Better Act, also referred to as the Reconciliation Bill.

Senator Kaine asked our customer, Jim Zuras of Fairfax, why he chose to install solar panels and a battery system, and he explained, “We get a lot of power outages, and after doing some research I learned that I could get a 26% tax credit off the full price of the system if I installed batteries and solar. I wouldn’t get the credit if I had only installed the batteries.” Ms. Hopper said that the upcoming Build Back Better Act, if passed, would allow the credit for a standalone battery without solar. It also currently includes the ten year tax credit extension at 30%, and it has a direct pay option for businesses and tax exempt organizations. But what it doesn’t include is the direct pay option for lower income homeowners.

“We’ve been asking for two things,” Ms. Hopper said. “First, there is currently a 26% tax credit, and we thank the Senator for extending that for two years. But we need an extension for a longer period so that companies like Ipsun and customers like Jim can have some runway and predictability.

"Second, we’ve been asking for direct pay so that if folks don’t have that tax liability they can have it as a refundable tax credit. You can see what a big difference stable and predictable tax policy makes for businesses on the ground and homeowners like Jim,” she added. 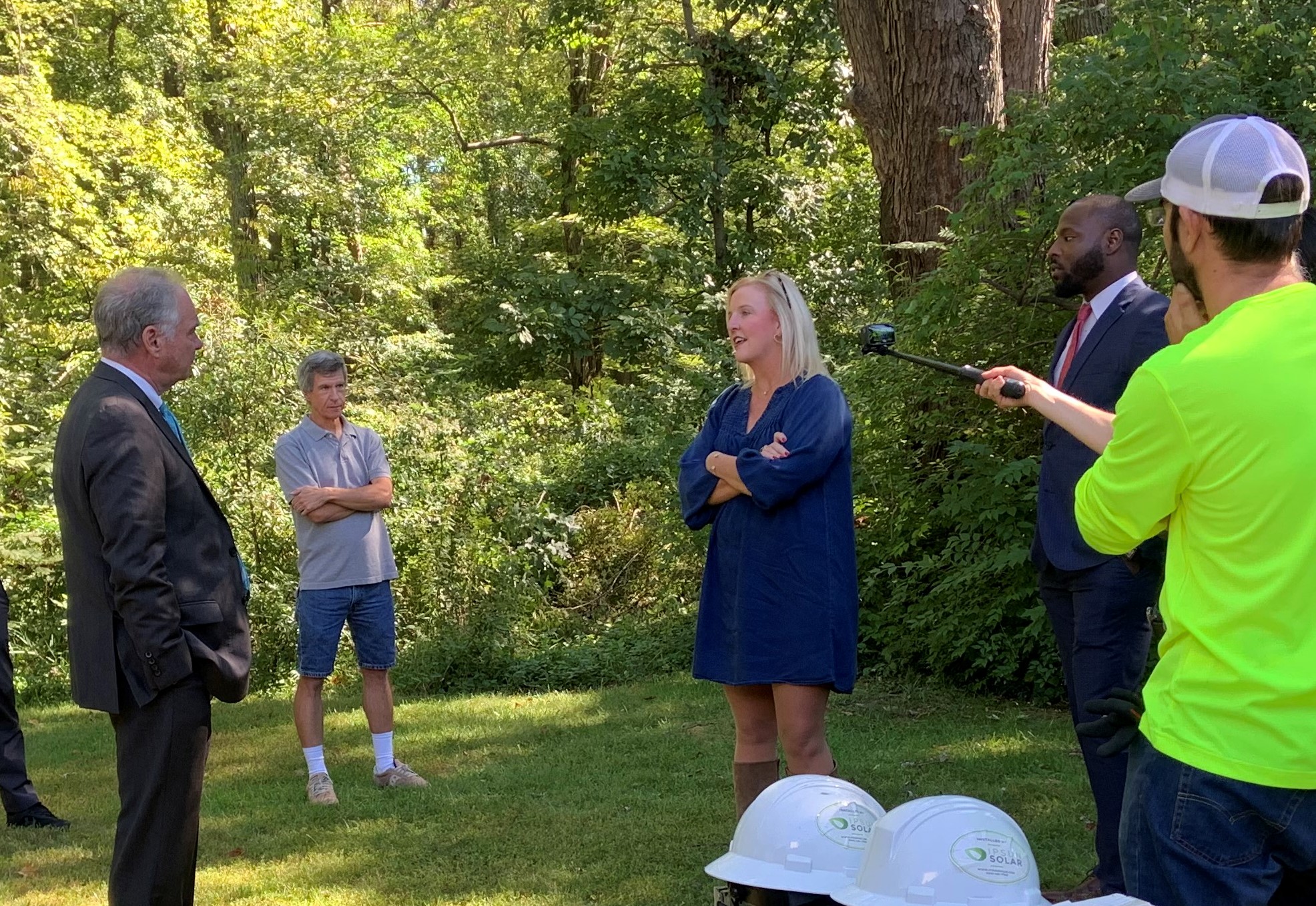 Senator Kaine said, “We are definitely in strong support of the tax credit and we should extend it for longer than two year chunks. That makes no sense to make it so unpredictable and make everyone keep coming back to ask to extend it every two years.”

Helping Our Employees and Our Company

Senator Kaine went around to each of our installers and electricians and asked what brought them to the solar industry. Their stories range from being laid off during Covid and finding work at Ipsun, owning a DC tour company which was shut down by Covid, and pivoting to renewables from an electrical company that installed fossil fuel gas generators.

Herve pointed out that these installers have quickly moved through the ranks at Ipsun as they’ve gone through our internal training program.  Each shared a story of finding opportunities to grow as a project manager, roof lead, or electrician. 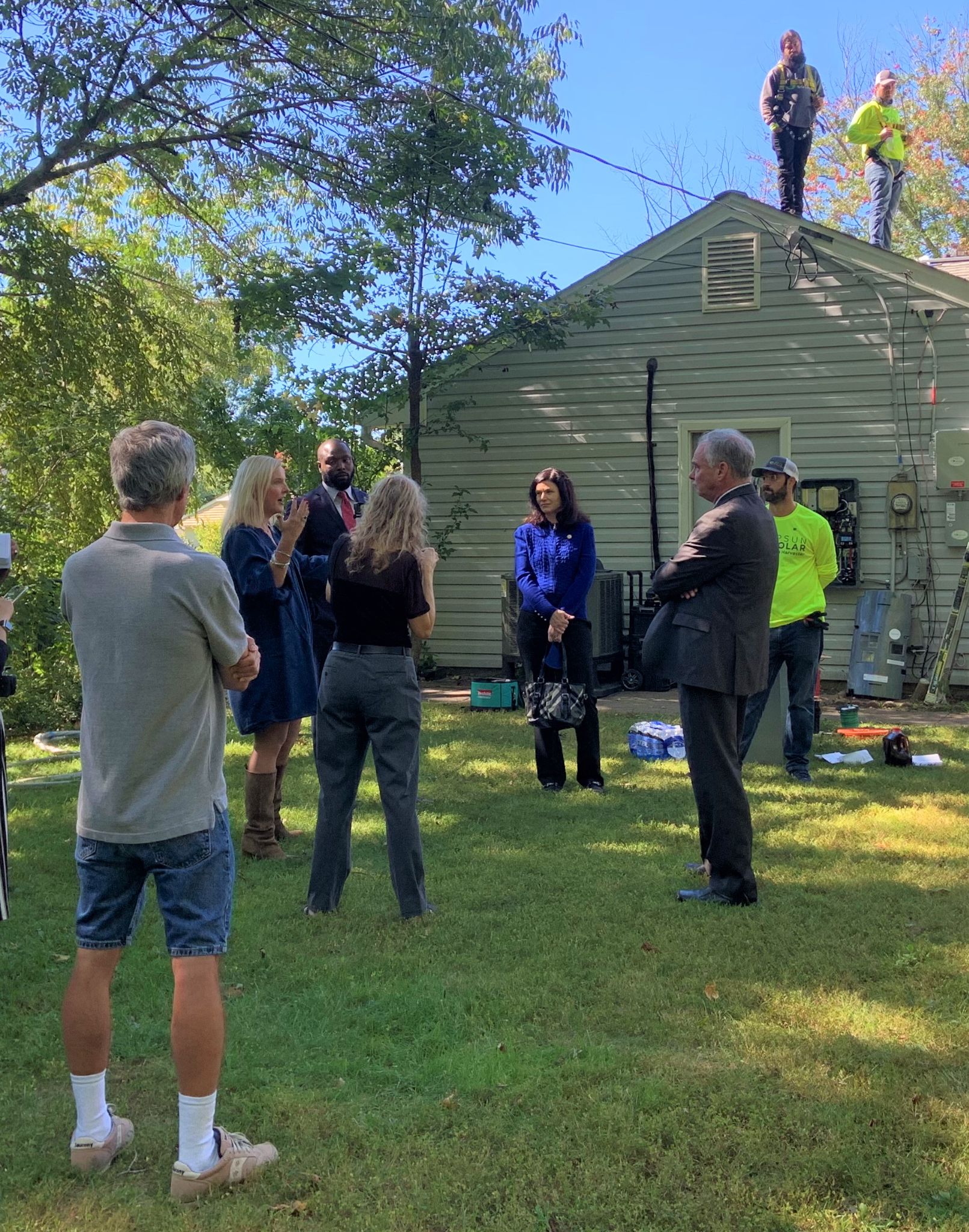 “I started a year ago with no experience,” said Gerardo Amador, who was taking part in the conversation from his rooftop perch. “I used to work for a construction company and was laid off because of Covid. I saw Ipsun was hiring and applied. I’ve learned so much. It’s a lot to take in at first, but eventually you get the hang of it and now it’s a piece of cake. Now I’m a roof lead— it’s great to have more responsibility and I love what I do.”

Herve mentioned that the tax credits not only help our customers, but they also help keep businesses like ours moving ahead, hiring, and providing that in-house training —and predictability helps with both the business planning as well as keeping our customers from feeling rushed in their decision making. All of which helps fight climate change on a daily basis.

“We have that 26% tax credit for another year which is great, but it would help so much to extend it for a longer time, and adding that direct pay option for individuals would have a huge impact,” Herve said. “Direct pay for corporations is nice, but it’s the individual homeowners who don’t have access to other methods of finance like lines of credit. If individual homeowners could have that option to get an immediate refund on the tax credit it would make a huge difference.”

Ms. Hopper added that direct pay would expand the solar customer base dramatically. “The tax credit works now as an offset to your tax liability, but you have to have a pretty big liability for it to be meaningful for you. Direct pay will open up the market to a much more diverse population that could benefit from it,” she said.

In fact data shows that 26 million more homes would potentially be able to afford a solar project if a direct pay option was made available to low and moderate income households. 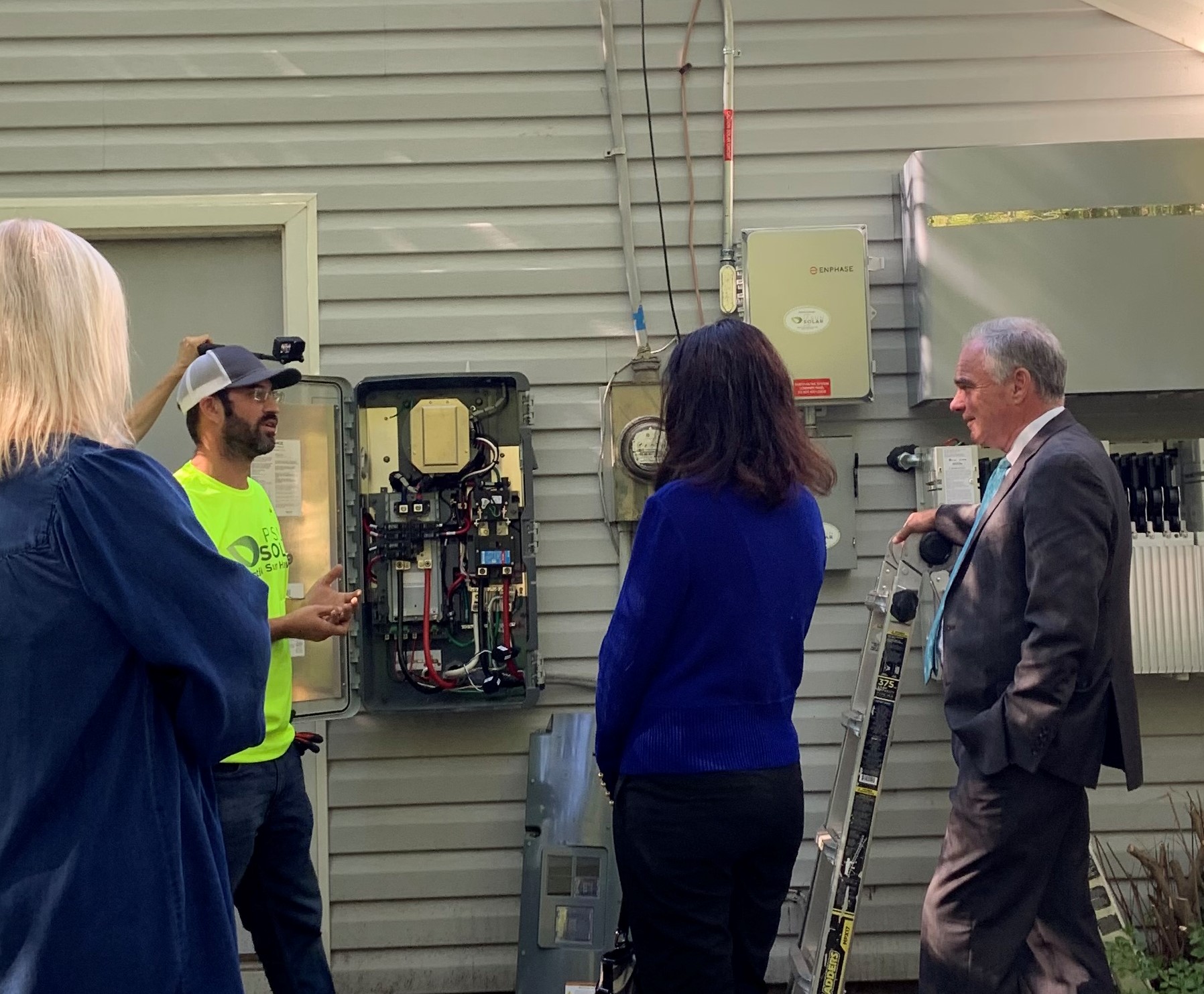 “We really see a big difference between a tax credit and either a marketable or a refundable tax credit,” said Senator Kaine. “Without a tax liability, entities like a non-profit can’t use it but if it’s refundable you really accomplish the objective.” 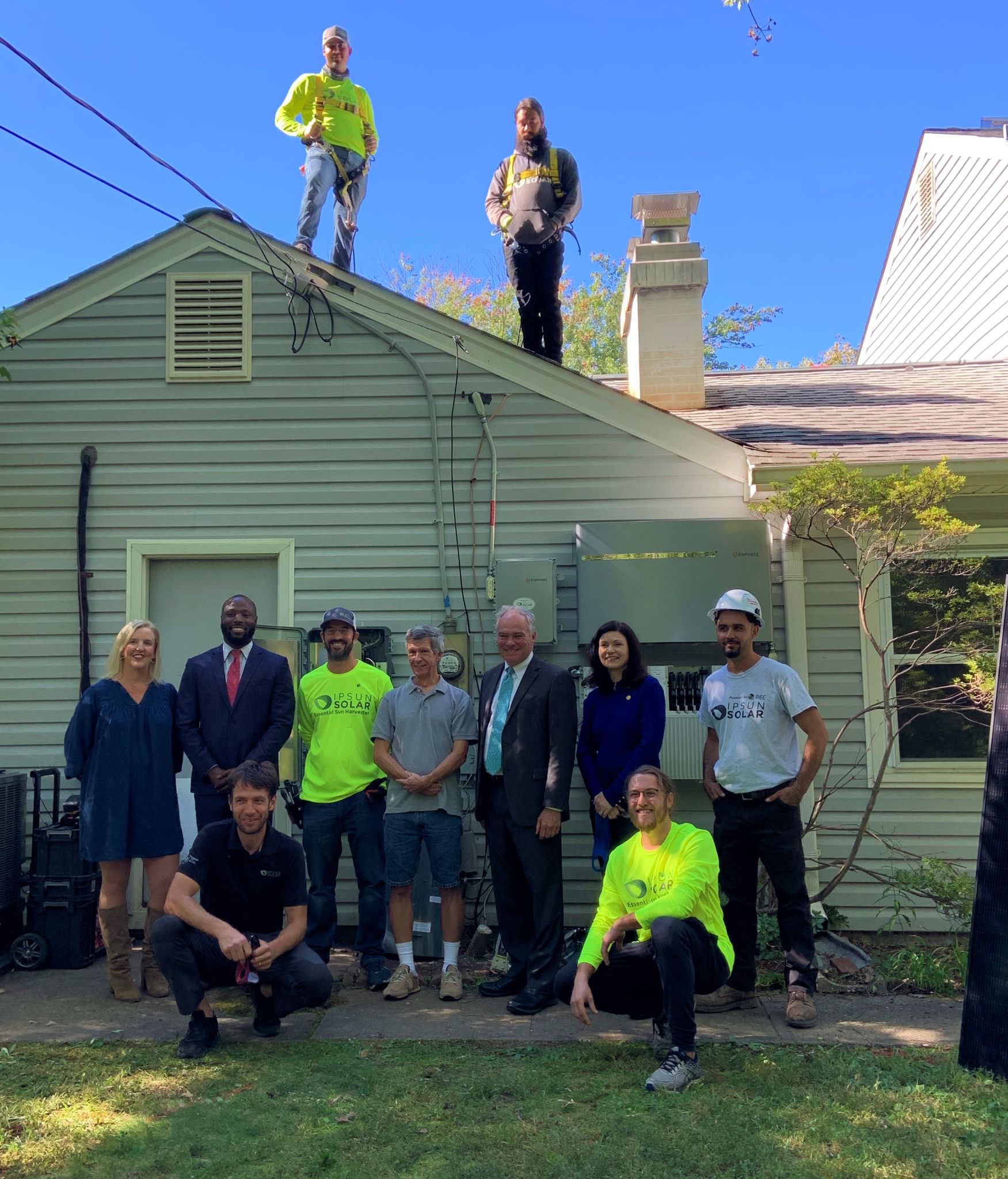 Please help us let all of our legislators know how important it is to extend the tax credit and add residential direct pay (identified in the tax code as Section 25D) into the Build Back Better Act. Your phone calls make a huge difference! We need to do as much as we possibly can right now to help our legislators understand the urgency of passing climate legislation.

Vote Solar has made a handy tool for you to use to make the calls. Click here to get started.

You can also add your name to a sign-on letter to federal legislators in support of Direct Pay 25D at Residential Renewables for All.

Add to your impact by sending a note to your legislators in favor of the full suite of climate policies in the Build Back Better Act. Generation 180 has built a handy tool with a pre-written letter— just fill out your info and they’ll do the rest.

If you want to learn more about the climate policies in the reconciliation bill, we recommend this great update by one of our favorite clean energy journalists, David Roberts: A close look at the clean energy legislation offered by House Democrats.

As always, our thanks to you, Ipsun fam, for stepping up and taking action with us to help fight climate change! You’re the best!